Original version of the ICANNWiki logo 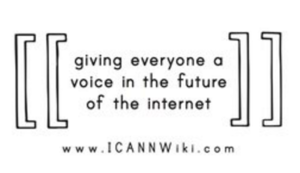 ICANNWiki is the unofficial wiki for Internet Corporation for Assigned Names and Numbers (ICANN), and is used for the not-for-profit organisation dedicated to supporting the internet community's collaborative development of wiki articles on ICANN and internet governance-related topics. The wiki provides neutral, third-party information for ICANN meeting attendees and internet citizens at large. It was originally an open platform governed by wiki values, such as neutral point of view, transparency, assuming good faith, and building together. The wiki subsequently tightened editing access by requiring log-in after registration around October 2007. It is now only open to editors by invitation. The project is independent from is ICANN, and is based in Portland, Oregon, USA.

The Internet Governance space is known for being highly technical and obscure, making it difficult to develop a general understanding of the issues involved. These issues are pertinent to the daily lives of all Internet users, as well as those on the other edge of the digital divide, still waiting for Internet access. ICANNWiki works with the community to break these complex concepts down into understandable, fully-referenced, fact-based, and neutral articles.