From WikiIndex
(Redirected from WikiLinks)
Jump to: navigation, search 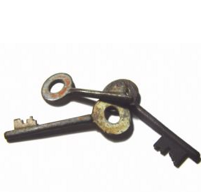 Keys are used within the WikiIndex logo, and indicate the power and ease of 'unlocking' access to a huge plethora of global information, as found, and 'wikilinked' within the many available wiki sites.

A wikilink, originally coined WikiLink, is an internal link embedded within the text of an article or similar editable page in a wiki. A wikilink is a syntax specifically unique to wiki websites – a true wiki wiki concept and idea.

One of the most compelling things about these are 'future links' or 'red links' – the ability to leave a proposed page blank for someone else to add ideas on said subject within the proposed new 'red link' article.

The term 'wikilink' arguably came to prominence following the creation of Wikipedia, which is now the world's largest online encyclopedia. It became particularly prominent as a result of Wikipedia moving its wiki engine from its original UseMod Wiki to the now ubiquitous MediaWiki (MW) software, the same which this WikiIndex wiki now runs on. A wikilink is created by enclosing the intended page title word(s) in double-square brackets – as in [[link to another page]].

However, todays' wikilink has unfortunately forgotten, by virtually all, except the few hard-core wiki users which grasped this new 'wiki' technology in its infancy, the original method of linking to other pages within a wiki. Credit must go to Ward Cunningham who created the very first wiki software, which he coined WikiWikiWeb. Cunningham's method of creating links to other pages consisted of simply joining two (or more) words together, without any spaces, but importantly, ensuring that the first letter of each word was capitalised. This ingenious yet simple method came to be known as CamelCase. Some of those early hard-core adopters pay homage to this day by continuing to use CamelCase wording within todays' modern double-square bracket wikilink. However, for wiki sites such as Wikipedia, the use of CamelCase is very strongly discouraged, simply because CamelCase wording or terminology is grammatically incorrect, and is not befitting of an encyclopedia.