Wikimania 2010 was the sixth annual International Wikimedia Conference, and was held at Gdańsk in Poland on 9th - 11th July 2010. Approximately 500 people from 67 countries attended. 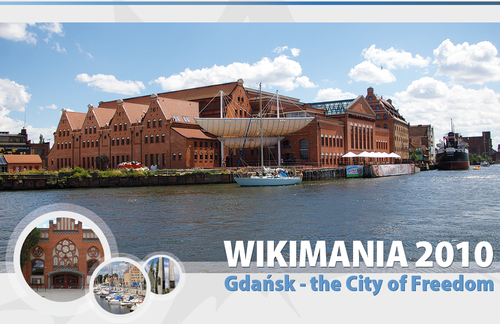 For the Socialtext.net–hosted wiki spawned from a panel at Wikimania 2006, see Enterprise Wikimania.

Wikimania is the annual international conference of the Wikimedia community. Wikimania allows the community of Wikipedians, and the general public to learn more about Wikipedia and / or wiki technologies in general, and share their experiences face to face with free knowledge initiatives and events all over the world. Wikimania is organized by a different local WikimaniaTeam each year. In 2012, the conference took place in Washington, D.C., and the 2013 conference was hosted by Hong Kong. London was the home of the 2014 gathering. The 2015 event took place in Mexico, whilst the 2016 meet-up was in Italy. The last event in 2017 was held in Canada, whilst the next conference to be held in 2018 is scheduled for South Africa.

Wikimania is funded primarily by the Wikimedia Foundation (WMF); with further additional funding from other local, national, and international sponsors.