ZeFrank.com was created by a man known as Ze. Ze has become a mastermind of online entertainment, his site having amusing videos, games, "stuff to read", "stuff to watch" and so much more.

Hoped this was going to make a splash, humor works all the time.[edit]

"If you haven't seen Ze Frank's hilarious videoblog, it's worth checking out. A few weeks ago he challenged visitors to create an "Earth Sandwich" where two pieces of bread are placed exactly opposite each other on the globe. Google mashups showing what's on the opposite side of the Earth and a live GeoRSS-based bread gallery were provided. A piece on NPR this Saturday details the concept and a team from New Zealand and Spain completed the challenge. Then on Friday he allowed his show to be written by his viewers who battled out 2,000 script revisions in a Wiki. Sunday's New York Times describes the results." via Slashdot

Ze Frank is getting more popular, and one of the tricks in his bag is a wiki that he is encouraging folks to help write the daily 3 minute video weblog show. Very fun. After the first script was written by many, many folks fighting to have what they thought funny be on the front of the script, it was like writing by committee. I suggested they think about the wiki in a different way, and reconsider focusing on the main page. 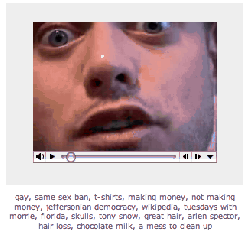 Over at the wonderful video weblog zefrank, he has opened up the script writing up to contributors of his wiki Zefrank.

The wiki is used to write the script for the show: Fabulouso Friday. Was it successful?

Congratulations on 1,500 script edits and over 15,000 views of the Fabuloso Friday script!